The Heroin Epidemic. Part 1 What It Does to Our Brains

Heroin and opioids. They're a scourge in our schools, among our youth. Learn more from the National Institute on Drug Abuse.


Then buy our book, Healing the Brain. Thank you! 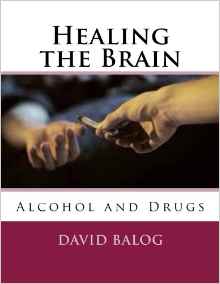 Posted by David Balog at 1:07 PM No comments:

CTE and real cost of football on Super Bowl Sunday

It's the biggest sports day of the year, Super Bowl Sunday, a festival of football. But a sport so celebrated is taking a toll on our youth and adults. Our book, Healing the Brain, gives a in-depth view of the science of concussions and CTE.

Another Iowa family is donating their son's brain in the name of CTE research, but they are doing so at the request of their son. Zac Easter's devotion to football started in third grade, one of those kids in the middle of the action hitting and getting hit.

"He's a young man who loved the sport, who like any other athlete didn't want to take himself out of a game -- unless somebody made him," said Brenda Easter, Zac's mother.

Zac played 10 years until he was forced to stop in the middle of his senior year at Indianola.
"He had three confirmed concussions and he had to quit," said Myles Easter, Zac's father.

During his final game, Zac was not backing down from an Ankeny lineman towering over him.
"I knew that last one was not good, at Ankeny, I could just see the look," said Myles Easter.
Zac's father was Indianola's defensive coach.

"I knew he was done. I knew that was it for football," said Myles Easer.

"'I'm good,' those were the words, 'I'm good to go,'," said Sue Wilson, Indianola athletic trainer of her conversation with Zac.

Wilson was on the sidelines in 2009 for each of Zac's concussions.

"Back then, they could return to the field 24 hours later -- sometimes they were back sooner than an ankle sprain," said Wilson.

In the fall of 2014, Zac complained of severe headaches, problems with balance and with his vision. His family remembers him commenting about memory loss problems -- having a hard time remembering things and some slurred speech.

It was a Des Moines doctor who first mentioned CTE, chronic traumatic encephalopathy.
"I remember looking at Zac and said 'What exactly is CTE' and he goes, 'It's like brain dementia mom,'," said Brenda Easter.

Several professional football players were among the first diagnosed with CTE after they died and the issue is the subject of the Hollywood movie "Concussion."

"I was in denial, you know we're tough guys in this family. We'll get through this you know heal up over time is what I thought," said Myles Easter.

Of course, mom went looking for help in research, and she discovered what her son already understood.

"He just looked at me and said mom, 'There's no hope for me. There are no treatment programs. I know more than most of the medical professionals I've talked to and there's no hope,'" said Brenda Easter.

Zac moved back home last fall as his condition got worse.

The family said it was very difficult to see a strong young man -- very intelligent -- really go downhill so quickly.

Zac knew CTE could only be diagnosed by direct tissue examination of the brain, after death.
"And he said to me, 'Mom, I want my brain donated to science,' and I said, 'Nope, someday Zac we'll do that but I don't think you're done with it yet so let me find the right help for us -- don't give up on me," said Brenda Easter.

Just after midnight on Dec. 19, Zac drove to Lake Ahquabi and shot himself. He left a note in his car apologizing to the first responders and called the sheriff's dispatch to tell them where he was.
"They heard the gunshot go off on the phone," said Myles Easter.

"We drove out there as fast as we could, and it was too late," said Brenda Easter.

Zac took care not to damage his brain preserving it for research. He left two notebooks in the family room including a journal that documented his daily battle with whatever had taken over his body, his thoughts and his life.

Mike Hadden is a professor in sports sciences at Simpson and just finished a sabbatical studying CTE.

"Through his journaling, we have so much material and information from this that it's almost as if, I mean, it's a firsthand experience and so we can tell that story," said Hadden.

Zac writes in detail about each concussion and other blows to the head his parents and coaches didn't know about.

"His buddies had to carry him off the field because he could hardly walk, he was that dazed but he wasn't going to tell anybody and his buddies were buddies so they didn't either," said Brenda Easter.
Concussion protocol has changed dramatically since Zac played his last game at Indianola six years ago. Wilson said these days any symptom, even a headache means the player is done for the game and won't come back until doctors clear them.

"I feel a little responsible because he was in our care. As an athletic trainer, our ultimate goal is to keep kids safe. That's why you go into athletic training," said Wilson.

In Zac's writings, he expresses his desire to tell young athletes it's OK to tell coaches if you're dizzy or have a headache, OK to take yourself off the field wanting to tell everyone that all those concussions changed him that helmets need to be safer that more research needs to be done on CTE.

Posted by David Balog at 9:50 PM No comments: