I Survived Trumpworld (Barely). Will America? 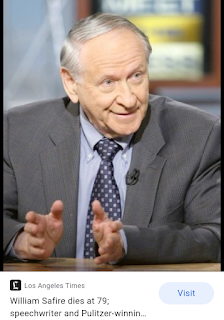 For 12 years I worked as an editor at the Charles A. Dana Foundation in New York City. My office was at 745 Fifth Avenue which is significant because next door was 725 Fifth -- Trump Tower. I saw Trump himself from time to time while walking around on my lunch hour. He was always surrounded by a team of men in dark suits and dark personas being lectured by their leader. They'd gather at the nearby GM Plaza, where the men would cower and Trump would bloviate. (I hid nearby twice to get a flavor of his tone.)

I did not know then that my boss at the Dana Foundation, William Safire, had close ties to Trump and was part of the infamous "favor bank" of city power brokers. In this club, no money was  exchanged -- just deeds that advanced the interests of members. I've read that Safire's original, big favor to Trump was to help get his marginally qualified sister appointed to a federal judgeship. In the process, Safire held the young Donald's hand as he gained entry into the New York and DC Republican power elite.

Having now witnessed and experienced Trump and Trumpism for four years, I can say they mirror the experiences I had under Safire. My emotions sunk on Trump's inauguration day and fell therafter.

Through cronyism, William Safire came to be chairman of the influential Dana Foundation in 2000. Dana had a large commitment to the cause of brain research. I began work there in 1995.

Safire, who died in 2009, described himself as "the vituperative right-wing scandal monger" for the New York Times. He was probably more well-known as the Sunday language columnist for the Times Magazine. Former speech writer for President Richard Nixon (Safire was responsible for the term "nattering nabobs of negativism" -- actually delivered by Vice President Spiro Agnew), he traded in slash-and-burn, transactional relationships, just like Trump. (If you doubted Safire's loyalty to Richard Nixon, you need only stroll by the life-sized, autographed picture of the disgraced ex-president hung outside Safire's office. To Safire, Nixon did nothing wrong in the litany of scandals and crimes called Watergate. Nothing.)

Safire was hired by the Times when the paper realized it needed a right winger to counter the enlightened voices of Anthony Lewis, Russell Baker, Tom Wicker, Howell Raines, and others.

Like Trump, Safire fabricated and inflated his public image. At the Times, by 1978 Safire was about to be fired for lack of reader interest when he reinvented himself as a "journalist" (for which he had no training…his biography said only that he "attended Syracuse University"). As a marketing pitch man for Maytag Appliances, Safire met then-Vice President Nixon at the "Kitchen Summit" with Khrushchev in the Soviet Union.

The first victim of his "hatchet journalism" was Bert Lance, President Jimmy Carter's first budget director. Having helped push Lance out the door, as was his pattern, Safire later claimed that the two had become friends and colleagues. Safire also had a direct line to the office of the Israeli prime minister to feed and receive political dirt on world leaders. In the run up to the Iraqi War, Safire was stirring the pot of lies about Saddam Hussein's weapons program in his column. He also advocated for the discredited Times reporter Judy Miller, who promoted the theory of Iraq's Weapons of Mass Destruction, later found to be based on inaccurate information from the intelligence community.

In one memorable meeting at Dana, Safire recounted how on Meet the Press, in his avuncular tone, he tried with the help of host Tim Russert, to patch things up with Bill Clinton after having called Hillary Clinton a congenital liar. On the air, Russert offered Safire a pair of oversized boxing gloves, which if he signed, Russert said he would get Bill Clinton to sign as well, as a symbol that, again all was well. The president, an enraged Safire told us, "refused to sign the gloves and returned them unsigned to my office." Red with anger, Safire indicated that this was all you needed to know about Bill Clinton.

Like Trump, Safire was penurious and a deadbeat. My freelance writers and designers had routinely been paid upon submitting a bill when he decided to "stretch them out," needlessly, to 30-days payment. The move strained freelancers' ability to budget their finances and added extra stress on me and my fellow Dana editors. And it was needless pain because Dana was a wealthy non-profit: Safire controlled an endowment just short of $400 million.

Donald Trump has shown astonishing indifference to the deaths and suffering of Americans in the pandemic, to the massive numbers of families without jobs and income, and to the children and families at our borders, emotionally scarred for life. Similarly, his patron, Safire, was called by his own treasurer "the cheapest man in the world." In the aftermath of 9/11, Safire authorized a paltry one-time contribution of $50,000 to the Times Fund for the Neediest New Yorkers. This at a time when New York corporations and individuals were making much larger contributions, financially and in-kind, to a devastated city.

Safire and Trump created desultory, mean environments where women were objects to be used in sexual relationships. Aside from being morally objectionable, these arrangements (in Safire's case with women on staff) created favoritism and distrust among the staff as we tried to figure who was in favor and who wasn't. I was ordered to spy on one such woman by another who had become my boss.

Finally, Trump and Safire shared a total lack of pathos, or empathy. Instead they valued loyalty, especially blind loyalty. Safire told us directly that we were to be available to him at any time. He asked for and received our cell phone numbers. He threatened to fire staff not willing to sacrifice themselves and their family life to his irrational, erratic needs. One colleague, the intensely smart and capable Barbara Rich, saw no other option but to surrender to monstrously long hours and work demands. Each year, I watched as she managed to get only four days away of her four-weeks of vacation time (which usually included a three-day holiday weekend). A proud liberal and one-time campaigner for Robert F. Kennedy, she felt it necessary to accede to Safire's views by reading far right-wing Web sites such as the dreadful Drudge Report. Barbara was the only experienced journalist at the Foundation and she admitted she felt debased as Safire called her his chief "flak."

A breast cancer survivor, Barbara resumed smoking to deal with the stress. I winced as she kept adding projects and travel to her workload. One day, I watched her, ashen, break up with her partner by phone. She died of a stroke far too young a few years ago.

I resisted his work demands as long as I could, but when asked to write and edit a book on an insanely short schedule of six weeks, I knew I couldn't pull all-nighters and give up my personal life. My partner, Fred, and I had just built a weekend house and I couldn't bear the thought of him there alone while I stayed in the city indefinitely.

The worlds that Trump and Safire created were harsh and heartless. When I quit the Dana Foundation in 2006, it was very painful and career-damaging. I left a job that as a gay man I felt comfortable in because of the access I had to smart, intellectually, and sociably able colleagues. My work, despite the stresses, had a high "psychic reward" I never was able to replace.

The consequences of Trumpism, so similar to "Safireism," cut deep. They derailed lives, and ruined the health of workers. We used to joke that we wrote about the stress hormone cortisol as oceans of it flowed past our offices. If you wanted to maintain your relationship with him, or your job, the key was being able to call him "Bill." It signaled an obeisance, a surrender to his views and world, at least superficially. I could and would not do it.

How did Safire ultimately gain and maintain his power and influence? Much in the same way that Trump does it. Safire exploited a very basic principal of human behavior, something I learned from the brain scientists at the Dana Foundation: Fear is our most powerful emotion. Anybody in the advertising world knows this basic fact and exploits it to the maximum extent. Those who abhorred Safire's right-wing views, nevertheless glommed on to him to avoid his wrath, which could be terrifying. He could offer a word of slight praise and then five minutes later be in your face physically shaking with rage, irrationally and often misguidedly. Much like other men on the high-end of the corporate ladder, Safire had an imposing physical presence: he was quite tall and physically intimidating. He was another arrogant CEO, who in the words of my colleague Barbara Rich,  was "looking for redemption from this world and not going to get it."

The "boss," as one especially maltreated secretary called him, also exploited another biological principle, phototropism, the basic tendency of plants...and humans...to bend toward a light source. He preyed on anyone's desire to be near power. He name-dropped his celebrity connections, (one being Monica Lewinsky) to remind you of the access he had created and to those who wanted to get that access (or a gift from the money he controlled) he readily offered a carrot. Oblivious to his audience, he once announced in a meeting that he was going to tell us everything we were dying to know about Monica. He had no clue that he was speaking to New York liberals and we did not want to hear his tawdry details, including information about the blue dress. I began to hate Amtrak trips to his office in Washington and I literally got depressed from the city and the atmosphere I experienced there.

Under Donald Trump, our country has gone down the same life-draining path. Particularly during the isolation induced by the COVID-19 pandemic, caused by Trump's incompetence and indifference, rates of depression, isolation and despair are now sky-high across America.

We won't fully realize how bad it's been until it ends -- both Trump's rule and the pandemic.

It took me years to recover from my traumatic experience on the periphery of America's power center. It eroded my self-confidence and self-image. It ended a writing career in which I took great pride.

I hope America fares better after Trump and recovers much more quickly. Joe Biden and Kamala Harris, I'm pulling for you.

Posted by David Balog at 6:30 PM No comments: