The human genome, whose mapping and sequencing was initially completed in 2003 and revised since, is the blueprint for homo sapiens. The genome contains the complete instruction manual for building a human being from our approximately 20,000 genes. Wrapped tightly in a spiral ladder of DNA, our genes are found in the nucleus of each of the 37.2 trillion cells in our bodies (except mature red blood cells).
At least 30 percent of the different genes that make us human are expressed in the brain and spinal cord (the central nervous system). By far this is the highest proportion of genes expressed in any area of our bodies. Far more than just determining our height and hair color or telling us where our ancestors lived, our genes (“nature”) influence the development and function of the brain, and control how we think, move, and behave. Having said that, our genes are not our destiny. Combined with the effects of “nurture,” changes in these genes can also determine whether we are at risk for a particular disease and if we are, how it might develop.
Posted by David Balog at 5:01 PM 1 comment:

Will you get Alzheimer's? 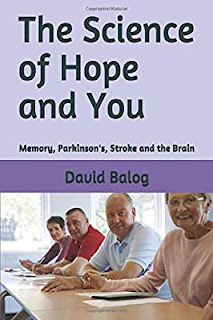 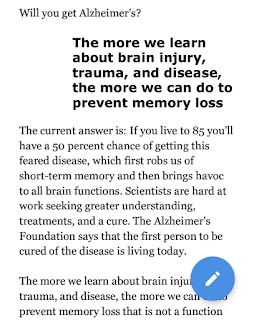 Posted by David Balog at 1:20 PM No comments: