Another Shooting: The Brain as Biological Weapon 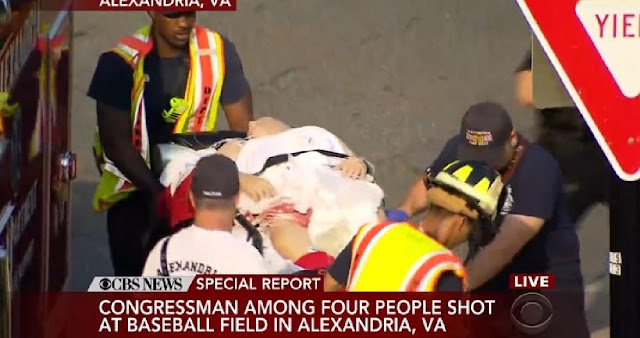 Once again, we absorb the news of a shooting, a nearly fatal shooting of a U.S. Congressman on a baseball practice field. This devastating act joins a long list of places and people associated with acts of violence. Manchester...Orlando...Sandy Hook...Paris...Columbine. What is happening in the brains of killers? Brain scientists look at biology and environment to begin to understand these senseless acts.


The Brain as Biological Weapon
[D]espite the attention they command in the media, the perpetrators of catastrophic acts of violence—terrorists, mass murderers, school shooters, serial killers—represent such a small fraction of the total population of violent individuals that researchers are not yet able to draw conclusions about the speciﬁc determinants of their behavior, or why it is so extreme. But as we seek to understand why such terrible events occur, we can begin to ﬁnd answers in what scientists have discovered about the biological roots of violence.

THE INTERPLAY BETWEEN BRAIN AND ENVIRONMENT

Weighing about three pounds—80% of it water—the human brain seems too small and fragile even to contemplate the enormity of the attacks, much less to assume responsibility for them. Yet crammed into that modest space are 100 billion neurons, each capable of as many as 150,000 individual transactions with its neighbors. In those transactions lie the origins of our behavior, our ability to see and hear, move and talk, think and feel, plan and imagine, create and destroy.

Violence takes us by surprise, but on a neural level, it is years in the making.

The brain is open to outside inﬂuence, however. In collaboration with the environment—the institutions of society, relationships with family and friends, interactions with the larger world, the teachings of culture and religion—the brain continuously reinvents itself, remodeling neurons, reﬁning pathways, and ﬁne-tuning activity. These changes, in turn, support a new outlook that colors the interpretation of sensory data and shapes new behavioral responses. The circle is completed by the environment’s reaction to that new behavior and by changes in the brain triggered by the act of behaving itself.
Violence takes us by surprise, but on a neural level, it is years in the making. Everything from impulsive street crime to coldly plotted crimes against humanity emerges from the sum total of the interactions between the brain and the outside world, providing outward proof that this relationship has been characterized by hostility, disappointment, or frank trauma. The decision to kill is the result of a developmental process involving nature and nurture, and it begins with the basic will to survive.

Animal and human research reveals that a surprising array of insults can injure neurons and alter brain chemistry, emotional responses, and reactions to stress, not only in childhood, but throughout life. These insults need not be cataclysmic; they may include experiencing violence, observing violence, behaving aggressively, isolation, neglect, being bullied or dominated, a breakdown in the social order, maternal separation, inattentive parental care, or inappropriate responses to a child with a “difficult” temperament.


DISRUPTING THE CYCLE THAT CAN LEAD TO VIOLENCE

The disgruntled and the disaffected are fertile ground for ruthless ideologues, who supply them with targets to hate and reasons to hurt. In their venomous diatribes, the hostile ﬁnd an outlet for their anger, the antisocial ﬁnd promise of a conﬂict far more exciting than their emotionally withered lives. Both discover an ally in a vengeful God eager for them to annihilate their enemies. Their formal training further fans anger into rage, strips them of any lingering feelings of guilt or remorse, and conditions them to kill without thinking.

Terrorism is the gruesome result of a biological process, but it is not a psychosis that can be medicated or a cancer that can be excised from the physical body. Disrupting the vicious circle that leads to terrorism requires changing the environmental factors that feed it. Development and diplomacy may help to reduce the pool of frustrated, irate individuals susceptible to hate-mongers, but it is not enough. Unless those who preach violence temper their rhetoric, its toxicity will continue to corrupt the minds and behavior of the vulnerable.

Strong words and passionate emotions are an incendiary combination for the human brain. When the words speak of compassion and the emotion is empathy, they can spark acts of tremendous courage. Words that advocate revenge and stir up feelings of enmity can ignite an inferno. The challenge to those who would inform minds is clear: Which fire will you light?


"Provides comfort and learning to the reader. Flows easily from one topic to the next and knits tidbits of information together in a unifying mosaic. Easy to read. Difficult to put down." --Michael J. Colucciello, Jr., New York State Dept. of Mental Health researcher, retired.
"Well researched, fleshed out with relevant case histories, this book packs a lot of solid information into its 152 pages. Written in an engaging style for the layman, it covers a wide range of topics. One learns a great deal about the biology of stress, particularly the vulnerability of the brain in the pre-adult years. This book also provides a glossary of key brain science terms and a listing of organizations serving the LGBT /Q community and resources on the brain."--Gary Bordzuk, librarian
Posted by David Balog at 10:39 PM