The road from Chicago to food and drug safety 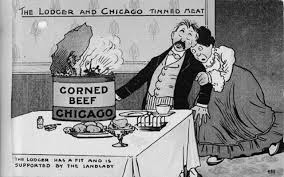 In 1906, The Jungle, by Upton Sinclair, shocked Americans about a dangerous lack of food safety.

Mary had a Little Lamb

And when it began to sicken,

She sent it to Chicago

Where now it's a can of chicken.

--Satirist on The Jungle by Upton Sinclair

Supposedly over dinner one night in the White House, President Theodore Roosevelt was glancing through an advanced copy of The Jungle, the muckraking novel of scurrilous practices by the nation's meat producers.

Dead rats, Sinclair wrote, were winding up in hot dogs, for example.

In short order in 1906, Roosevelt pushed for and passed a meat inspection law and the Pure Food and Drug Law.

These acts led to the creation of the Food and Drug Administration, which conducts rigorous tests and enforces strict protocols on products introduced to Americans via processed foods, new drugs, and new medical procedures.

The Covid-19 vaccines had to pass rigorous tests involving hundreds of thousands of volunteers. The testing is arduous and conducted with strict safety in mind.

Learn more about the vaccine, about Covid-19 and about public health in this new book: 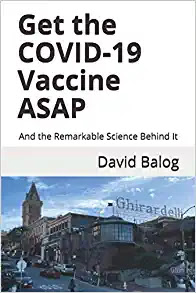 Get the facts today!
Posted by David Balog at 4:50 AM