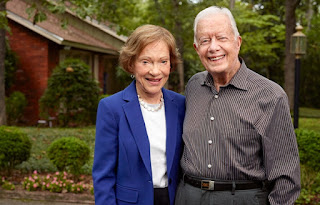 I cast my first vote for president for Jimmy Carter. Most conclude his was a failed presidency, but he will look better as time passes. He ended U.S. colonialism in Panama, brought real peace to Israel and Egypt that endures today, and was years ahead of popular opinion in championing solar energy. But, of course, it was all his post-presidential work that raised him to world attention.

Mr. Carter and the Carter Center saved millions of lives previously lost to intractable diseases in Africa. He highlighted the housing crisis for the poor literally building houses for Habitat for Humanity. He spoke out against the horrors of human rights abuses against women in this country and worldwide. Mr. Carter brought election fairness to numerous countries. Jesus, he said as a devout evangelical, would have supported gay marriage. His was a lone voice during the dark days after Bush started the Iraq war. He used his Nobel Peace Prize award in 2002 as a platform to speak out, as America's politicians cowered at Bush's bullying.

The days may be short now for this giant, diagnosed with metastatic cancer last week. I hope this is not the case. Whenever he leaves us, it will be an enormous loss. We are better, astonishingly better, for all he has done.