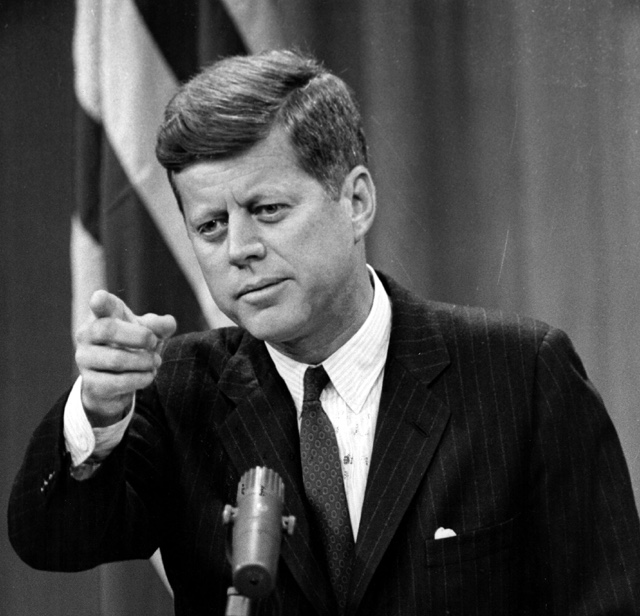 From Time magazine:
Vigor was the byword of the Kennedy years. After the wrinkled decorum of Dwight and Mamie Eisenhower, John F. Kennedy's America would feature people like him, the kind whose hair waved in the wind as they scrimmaged on the lawn at Hyannis Port, Mass. But for more than a decade now, as biographers have burrowed under the New Frontier, another J.F.K. has come into the picture. That would be the one with a multitude of serious illnesses whose life was a hidden ordeal of pills and injections, the one whose severe chronic back pain led him eventually to find relief in amphetamine shots from Max Jacobson, the celebrity physician later known as Dr. Feelgood. "I don't care if it's horse piss," Kennedy is reported to have told his disapproving brother Bobby. "It works."

Now enter Robert Dallek, a well-known historian of the presidency, bearing another stack of evidence and more bad news. At work on a Kennedy biography, Dallek became the first scholar to examine J.F.K.'s medical records on file at the Kennedy presidential library in Boston. Somewhat to Dallek's surprise, a summation of his discoveries published in the December issue of the Atlantic Monthly has set off a firestorm. It's not news that J.F.K. was in poor health much of the time, but Dallek paints the fullest and most unnerving picture yet of a President in constant pain from degenerative bone disease and heavily medicated. It raises the obvious question of whether voters should have known more about the health of a man who Dallek says often could barely climb a flight of stairs and could not put on his own socks. Dallek describes X rays showing that some of J.F.K.'s vertebrae collapsed while he was still in his 30s. The historian also learned that J.F.K. had nine secret hospital stays during a 2 1/2-year period in the mid-1950s.

"When I read about the hospitalizations, my eyes widened," says Dallek. "We never knew about this." Another revelation was the sheer quantity of medications Kennedy took daily during his presidency. "Steroids for his Addison's disease,"

In 1947 J.F.K., then 30, learned he had Addison's disease, a dysfunction of the adrenal glands that, among other things, regulate blood sugar and the body's response to stress. The treatment? More corticosteroids. In the years that followed, as he rose from Congressman to Senator to presidential hopeful, Kennedy denied rumors of Addison's, some of them passed along to reporters by political opponents like Lyndon Johnson. He finally admitted to it in 1960, more or less, when he issued a statement acknowledging an "adrenal deficiency."

Learn more about stress here:
https://drive.google.com/open?id=0B9uWJZjk-DYaWjFobmdOZzUtMUU
Posted by David Balog at 5:35 AM