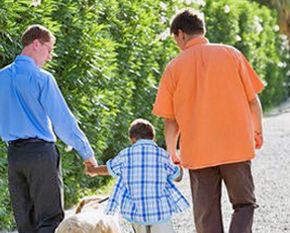 So it's been a few days since the astonishing annointing of Mr. Trump. Calls to suicide hotlines have spiked among our most vulnerable and that includes gay youth. We look closer in this excerpt from our new book Healing the Brain.


Risk Factors for Depression in Gay Teenagers
Gay teenagers not only face the normal physical and emotional stresses of adolescence, but must also contend with developing their sexual identities in a potentially hostile environment.

While straight teenagers also work to develop sexual identities, their peers are generally more accepting of their choices. But gay teenagers often must deal with rejection and teasing because of their sexual orientations.

While society has generally grown more tolerant of homosexuality, gay teenagers still face frequent discrimination and bullying, according to “Victimization of Lesbian, Gay, and Bisexual Youth in a Community Setting.”

The article, published in The Journal of Community Psychology, examined how frequently gay teenagers experienced rejection, victimization, and other stressors in their lives.

Results from the study showed 80 per cent of the gay teens experienced verbal insults while 44 per cent experienced physical assault.

Researchers Anthony R. D'Augelli and Neil W. Pilkington sampled 194 gay teenagers and surveyed how often they were verbally insulted, physically assaulted, and how their homosexuality affected their family and peer relationships. Results from the study showed 80 per cent of the teens experienced verbal insults because peers knew or thought the teens were gay, while a further 44 per cent experienced physical assault. Additionally, 43 per cent of males and 54 per cent of females said they had lost at least one friend after disclosing their sexuality
.
Even though these teens are victimized, they are often fearful to seek help or report bullying because it would reveal their sexual orientations. Their parents might not accept being gay and feel unsympathetic and even might blame the teenager for the bullying. Consider a 14-year-old boy who is a freshman in high school. The boy experiences the same stresses about tests and homework as the other students, but he keeps his biggest source of his stress hidden from his peers, family members, and teachers.

From a young age, the teen knew he was attracted to other boys. Until high school though, he never experienced the kind of bullying he now faces. Now, walking the halls, he's often called a “sissy,” “girly-boy,” and other more vulgar anti-gay slurs. Soon, the boy wonders if something is wrong with him. He wonders why the other boys in class won't accept him, and if he'll ever be “normal” in their eyes.

He literally has no one to turn to. He hasn't told his parents or close friends his secret, and is afraid that they'll reject him just as his other peers have. The worst part is that the harassment is getting worse, and he isn't sure how to handle the situation anymore. Fearing stigmatization, the boy in the example felt forced to conceal his homosexuality from potential support groups like friends, counselors, and family members. But sometimes, by “coming out” to these groups, some gay teenagers find the help they need to combat negative experiences in high school.

The American Academy of Child and Adolescent Psychiatry lists several concerns of gay teenagers as they develop sexual identities.
Some of these concerns include:
Posted by David Balog at 1:02 PM